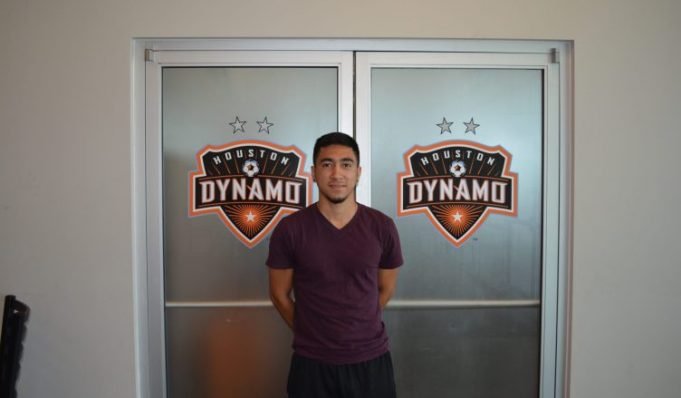 Memo Rodriguez’s journey to become a professional soccer player was long and uncertain, but now he is a name on the lips of every Houston Dynamo fan.

Like many footballers, Memo Rodriguez’s path to the MLS was not easy. When he was a teenager, Rodriguez had to leave straight from school, travel an hour and fifteen minutes to training, and then go back home at night to shower, eat dinner, and do his homework. This process often kept him up until late at night or early in the morning, and he had to wake up and do it all again the next day. Memo says, “It was a tough journey. A lot of sacrifice for me and my mom… It was a tough situation to be in but it all paid off at the end.”

“It was a tough journey. A lot of sacrifice for me and my mom… It was a tough situation to be in but it all paid off at the end.”

After high school, Memo still had many obstacles to overcome before he would reach the Houston Dynamo first team. In 2015, he was sent on loan to Charleston Battery, where he only managed to score 1 goal in 17 appearances. Memo admits that it was a frustrating time but asserts that there were many positives to take from the experience as well: “In the long term it really did help. It was just so frustrating not getting to see the field as much as I hoped to, but I think learning from players that had played maybe in the MLS, or played consistent minutes in the USL against top level players really helped me in the long run. I am in the position I am because it all started there.”

Following his season in Charleston, he was released by the Dynamo and spent the next year at Rio Grande Valley FC in the USL. Some players would have given up at this point, but Memo not only believed he could still make it as a professional, he believed he could make it back to the Dynamo first team.

“I went over there and had a mindset that I was going to have a great season and try to break the first team the next year.”

On being released and sent to RGV FC, Memo says, “That obviously really motivated me to show what I can do on the field, and I took it the right way. I went over there and had a mindset that I was going to have a great season and try to break the first team the next year.” And that’s exactly what Memo did, recording 6 goals and 7 assists in 2016 for RGV FC to lead the team in points under coach Wilmer Cabrera.

On March 1st, 2017, Memo re-signed with the Dynamo and found himself in the first team fold just a month later, making his MLS debut on April 8th as a substitute. Memo’s next big moment came on June 14th, when he scored a 109th minute goal to give the Dynamo an overtime victory in the US Open Cup Fourth Round over North Carolina FC. On July 5th, Rodriguez scored his first MLS goal, a beautiful long-range effort to extend Houston’s lead over the Montreal Impact. On the goal, Memo says, “It was full of emotions, and it was at home… My family, my friends, and the whole hometown city was there to witness the goal. For me, I was full of emotions; I still can’t believe it until now. But hopefully it becomes a habit.”

“I was full of emotions; I still can’t believe it until now. But hopefully it becomes a habit.”

Having Wilmer Cabrera at the helm of the Dynamo has been a huge help for Memo, since Cabrera already knew his game from their time together at Rio Grande. Memo says, “He gives you confidence. He tells you to have fun out there, but also to take it seriously.” At the Dynamo, Cabrera’s influence does not just extend to Memo, but indeed the entire Dynamo team: “He demanded everybody to be at the top level at RGV and he demands the same thing here.” Furthermore, two of Memo’s RGV teammates, George Malki and Taylor Hunter, made the switch from Rio Grande to Houston with Memo, and the three remain very close friends both on and off the pitch.

Memo says that the older, more experienced Dynamo players have also been a huge help to him. If he makes a mistake in training, they may get mad at him at the time, but after the play stops, Memo says, “they start giving me advice on what to do and how to do it… They don’t just do it for me; they do it for the whole team. Having experienced guys like Vicente [Sanchez] and [DaMarcus Beasley] help me out during training, it’s huge for my success.”

With many of the Dynamo players currently away from the team on Gold Cup duty, Rodriguez is well positioned to gain even more opportunities after scoring his first MLS goal for the team. However, the 21-year-old stresses that he will be ready to perform for his team whether he is starting or coming off the bench: “I really do hope to get playing time in the future, but I’m always going to be available when the coach asks me to. So if I start on the bench or start a game, I’m always trying to be the difference maker when I get on the field.”

“If I start on the bench or start a game, I’m always trying to be the difference maker when I get on the field.”

Memo’s team-first mindset is one of the assets that he brings to the team, and he stresses that everyone at the Dynamo wants to improve upon the team’s poor position in the table last season: “I think all the players have a set goal to make playoffs this year, and everybody has the right mentality [in] every game.” The Dynamo currently sit 3rd in the Western Conference table and are well on their way to earning a playoff berth. When asked if the team’s ultimate ambition is to win the MLS Cup, Rodriguez says, “That’s the plan. I think with the right mentality and hard work, we’re going to be able to achieve this one step at a time.”

We finished up with some light-hearted questions, asking Memo about a variety of aspects of his soccer-related beliefs. When asked who his favorite player was growing up, Memo says, “I liked Iniesta a lot growing up, just because I was a center midfielder back in the day. He was just so smooth on the ball, and I really liked how he played.” On the Messi vs. Ronaldo debate, Memo has an interesting take: “I’m a Madrid fan, but I always would take Messi over Ronaldo.”

“I’m a Madrid fan, but I always would take Messi over Ronaldo.”

Ultimately, footballers are remembered for their achievements. When Memo Rodriguez is looking back on his career fifteen years from now, he says that his goal is to have won titles and to not regret missing out on any opportunities that were presented to him. After such a promising start in his second stint at the Houston Dynamo, there will certainly be many more opportunities coming his way, and he will be an exciting player to watch in the coming years.

Click here and select an optin form from the menu above.